We breed English bred Labradors. Our foundation stock is English import and English bred stock from MS Sally Kelly of Kellygreen Kennels in Garderville, NV.  I started breeding predominately English bred lab in the late 1990’s. I was and have been extremely happy with the results. We produce a lab that has natural hunting ability, love the water, very intelligent with temperaments that make they the very best family companions money can buy. These labs look like your “TRADITIONAL” labs with nice square heads, solid in body and not hyper like many of the field bred dogs today. These guys are a pleasure to have around whether in a duck blind or in your home ! 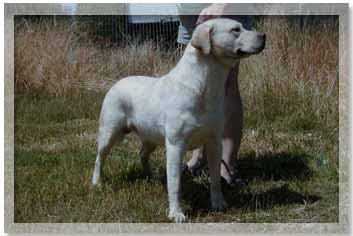 Hobie is a classic yellow lab out of “Steeler” on the top side, who’s famous grandsire Ch Tabatha’s Drifter at Dickendall JH was one of the first sporting breeds to win at Westminster in many years. His mother Kacy’s grandsire is NAFC/FC/AFC MD’s Cotton Pick’n Cropper. A blend of some of the finest field and show lines available today. He is from a tri-colored litter with all three colors in his gene pool. He is a very light yellow, with an excellent temperament, intelligence and trainability that makes him destined to produce the same in his pups. Hobie’s hips are OFA good, elbows normal. Hobie’s Pedigree 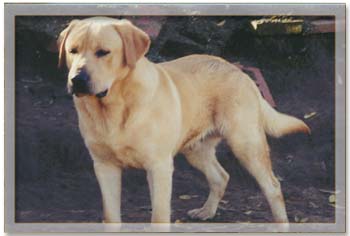 “Willie” is a large dog that has an excellent temperament, very intelligent with a “classic” blocky head. His pedigree is an excellent blend of some of the best field dog available as well as conformation champions that account for his classic good looks. He is a proven stud dog that is producing the same in his pups. Willie’s Pedigree 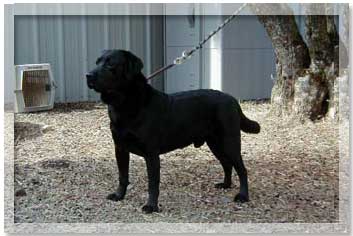 Crosby is a classic black lab out of “Steeler” on the top side, who’s famous grandsire Ch Tabatha’s Drifter at Dickendall JH was one of the first sporting breeds to win at Westminster in many years. His mother Kacy’s grandsire is NAFC/FC/AFC MD’s Cotton Pick’n Cropper. A blend of some of the finest field and show lines available today. A litter mate to “Hobie,” he has very light yellow lines as well as rich chocolate. He also has an excellent temperament, intelligence and trainability. Crosby and Hobie are two of the nicest young labs I have seen in many years. Crosby’s Pedigree

Our German Shorthaired Pointers are absolutely the finest ” field bred ” dogs on the market today. These dogs are “linebred” out of my “foundation dogs” listed below.  They have consistently produced dogs with a strong desire to hunt, better noses, strong instintual point which makes them easy to work with and to steady on birds. They are intelligent, biddable and very trainable by even the novice trainer and make excellent family dogs as well.   These dogs are all hunted over on wild birds.  All brood stock is carefully evaluated for the traits so important to make great hunting dogs. This is the only reason I am able to guarantee the quality of these dogs for two years. The breeding of dogs is both science and art to consistently produce dogs of superior quality. Our record speaks volumes to the consistent quality of our dogs for both hunting and competition.  We have produced National Champions and winners consistently for the last 20 years in a row. This year was not exceptions with a “Sonny” daughter winning the NGSPA National Championship in March of 2014 along with a Sonny grandson winning the AKC All Breed Pointing Dog National Championship just concluded in May of 2014. Come to the source of some of the very finest dogs bird dogs and bloodlines when considering your next hunting companion and friend. We are so very proud to have owned and loved all the following sires and they live on today through their sons, daughters and grand kids  here at the kennel. 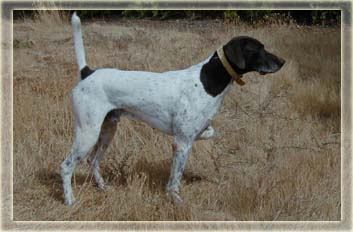 Sonny is one of the premier “All Age’ dogs competing in the U.S. today. He is line bred F.C. Dixieland Rusty, the Hall of Fame all time field producing sire. At 26″ and 70 pounds, he is as powerfully built as he is a powerhouse on the ground. Sonny is one of the most stylish dogs to ever grace the winners circle. To find out why “All Age Dogs’ of this caliber are so important to the breed and hunting dogs in particular, read the NGSPA National Championship write up in the American Field with excerpts under News on this website. Consider Sonny when only the best will do. Sonny pups available. Sonny’s Pedigree 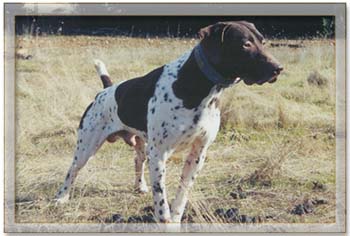 Gus has a blue ribbon pedigree (Hall of Famers FC Jigs White Smoke on one side and FC Dixieland Rusty bitch on the other) to go with his classic good looks. A true all-age dog every time down that finds birds! Prepotent by pedigree, ability and “get,” he is producing excellent hunting dogs as well as field trial prospects (puppy, derby winners and Reg. 11 Derby Classic Winner). Pups available. Chilled semen available or pick up at Sacramento or Oakland, California, airports. Gus’s Pedigree

Cowboy is a young all age son of FC/AFC Go with Gusto. He is already following in the winning ways of his sire “Gus”. He is the NGSPCA Reg. 11 All Age Championship Winner. He is “extremely” stylish on point, one of the most intelligent and biddable dogs we have ever worked. His first breeding produced some gorgeous pups with lots of potential. This dog has tons of point and produced it in his pups. His pedigree is a blend of some of the very finest bloodlines in the US today. Cowboy’s Pedigree

Flash is an exceptional dog with an exceptional pedigree. A proven performer with runner up National Field Championship titles in 2003 in Booneville, AK and in 2004 in Eureka, Kansas. He is also a proven producer with many winners to date. He is OFA excellent and at stud to approved bitches. Flash’s Pedigree