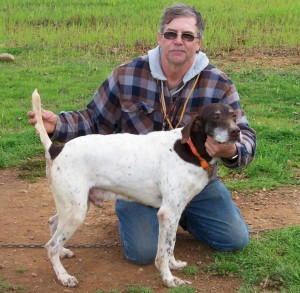 Congratulations to this year’s, 2010 National Field Champion Tonelli’s Little Stinker. Owned by Harvey Shannon Franco of Carriage Hills Kennels,trained and handled by Chris Goegan and bred by James and Sarah Messer out of their “great” bitch, NAFC/FC/AFC Annie’s Little Stinker. Reg CH/FC/and this year, 2010 National Shooting Dog Champion Runner up was Timberland Savannah Chip, a son out of ” NFC Sonny ” Chip is owned by Don and Ginger Kidd, was trained and handled to this prestigious win by Pat Waresk and bred here out of “Sky “, a daughter of the renown producer KJ Hightailing Saddle. NFC “Sonny” was bred by Terry Zygalinski of Windjammer Kennels. I was just lucky enough to have owned such a great dog. Sonny is 13 years old this month and doing well. ( see attached picture on him taken this week ) Although no longer producing pups he still enjoys outings and soaking up the sunshine and has given me the “thrill of a life time” watching him perform and now his son and daughters. Congradulations to all on their outstanding accompolishments