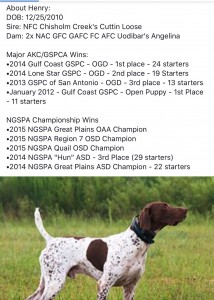 Henry has one of the finest field bred pedigrees in the US. His prepotent sire is NFC/FC Chisholm Creeks Cuttin Loose, a dog destined for the Hall of Fame having produced many of the very finest National field Champion winners competing today. His Dam is an equally noteworthy, GFC/GAFC/FC/AFC Uodibar’s Angelina, a two time winner of the NGSPA National Amateur Championship and also destined for the Hall of Fame. Along with his blue ribbon pedigree, Henry is an outstanding dog in his own right having multiple Field Championship titles in both AKC and American Field—–and then there is Henry, what a special dog. He is just as comfortable in the house as he is in the field. such a nice temperament to go along with his outstanding looks including a nice solid liver head, nice liver patching with lots of ticking.  He has already produced some winning offspring and the finest hunting dogs a person can buy. He is the type of foundation stock kennels and future line are built around. He is available at stud to approved bitches. Frozen and fresh chilled semen also available. Call 530 532 1833 if you would like to use him in your breeding program or would just like a pup out of the finest GSP available. 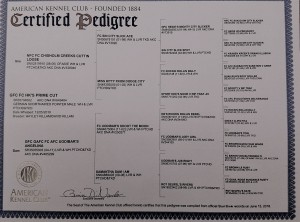 He has been one of my proven producers of the very best pups for the last 6 or 7 years. A son of a national champion, he also has one of the finest pedigrees also with a proven track record of excellence. 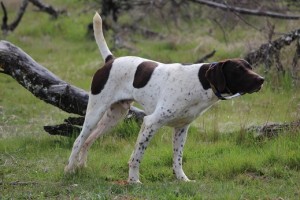 A breeding consists of 6 Pups. If you get less than six pups the stud fee will be prorated to $200 per pup. One repeat breeding. If you do not get pups after a second try you will be refunded your stud fee less boarding fees which are included in the stud fee if the breeding is successful. These are ALL proven stud dogs with pups currently sired. Our success rate is almost 100% on live breeding.

Palermo Ranch Kennels will breed bitches only upon approval of bitch and her pedigree. Quality dogs is job one of ones we sell and that carry our bloodlines directly from us. The finest kennels all over the US use our bloodlines of which we are extremely proud.

We have ” English bred” Labrador retrievers in all colors available. 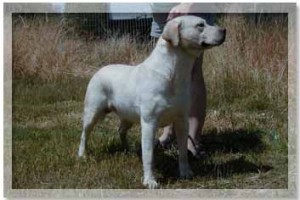