National Field Champion (NGSPA) and AKC Field Champion (GSPCA) Tonelli’s Rising Sun “Sonny” was inducted into the  “American Field” Hall of Fame at ” The National Bird Dog Museum” in Grand Junction, Tennessee. A painting of this picture with be hung at the museum as a lasting tribute to a truly great dog.  Sonny was bred by Terry Zygalinski of Watsonville, CA and owned by Douglas Stocks of Oroville, CA 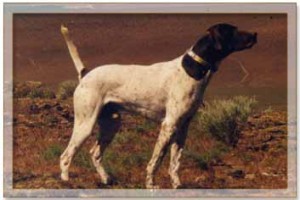 Sonny started his career winning early and often winning 7 American Field Championship wins or runner up culminating in the winning the NGSPA National Championship in Booneville, Arkansas in the very toughest competition in the US. He was scouted by Terry Zygalinski and handled by the owner, Douglas Stocks to this prestigious win.  He also placed twice in national all age competition at the GSPCA National Championships in Eureka, Kansas.

Sonny’s lasting contribution to the GSP breed will be in his production record.  He produced multiple National Champions, many field champions along with a countless number of great bird dogs. At this writing Sonny is still seen in the third and fourth generation of many of the very best dogs competing today.  He was one of our “foundation” dogs in the breeding program at Palermo Ranch Kennels and we continue to breed dogs with this great dog in their pedigrees.